Continuing our series of blogs called ‘Behind the Episode’. Our resident aviation expert, Kirsty, will be looking further into the real history threaded throughout our audio drama, particularly the aircraft featured in each episode and other aspects of life on the home front.

Whenever discussing life in Britain during WWII with my late Father-in-Law, conversations would invariably centre around three facts; it was dark, it was cold, and everyone was hungry. In the pre-war years the population’s dietary requirements were largely satisfied by drawing on the rich resources of its (then) vast Empire and by taking advantage of reasonably priced goods from other countries. Indeed, two thirds of the Nation’s appetite was satisfied by imports from abroad.

The German Reich was not slow to appreciate this point and from the outbreak of hostilities set about disrupting the flow of goods into Britain with the aim of starving the country into submission. Having clandestinely amassed a large and well-trained U-Boat fleet, the Nazis immediately deployed this lethal force against the vital transatlantic merchant conveys. With the allies limited to rudimentary air cover in the early stages of the war, the submarines were to prove particularly effective. During what became known as “The Battle of the Atlantic”, some 2,600 merchant ships would fall victim to U-boat torpedoes, claiming the lives of over 30,000 merchant seamen. Deprived of its once bountiful supply of goods, Britain had no choice but to introduce a strict system of rationing.

The rationing of Petrol or Motor Spirit as the Government preferred to call it, came into force as early as 16th September 1939. Coupons were available from the Post Office on production of a vehicle’s Registration Book, the quantity available being determined by the rating of the vehicle. For a small car this equated to about 5 gallons per month. Coupon books were valid for a period of two months and had to be surrendered before a new book could be issued. One was not allowed to hoard coupons; thus, any unused on the book’s expiry would be lost. Anyone using a vehicle for commercial purposes could apply for an additional allowance, but to prevent misuse, the petrol issued was leaded and contained a tell-tale red dye. Needless to say, there were heavy penalties for anyone caught abusing the system. In 1942 the use of petrol for private means was completely prohibited and cars largely disappeared from Britain’s roads for the remainder of the War.

Due to the large number of miners being called up for military service, coal was rationed from July 1941. Shortage of labour became so acute that ultimately mining was deemed a reserved occupation, but there was no let-up on rationing. As most homes depended on coal for both heating and hot water, this was a particular hardship. The use of water was also restricted with a family being allowed just one 5” bath per week, thus bath water had to be shared.
With materials in short supply and most factories given over to war work, from June 1941 clothing was rationed. As with petrol this was done on a coupons-based system with each person initially receiving 66 coupons a year. Each item of clothing had a coupon value; a coat costing 16 coupons, whilst a pair of shoes was 7 and underwear 8. With many women now doing war work, military style uniforms – “Siren Suits” – had become the dress code of choice as they were the most practical for factory work. Frills and lace disappeared from underwear, as did turn-ups from trousers, whilst skirts tended to be worn short, all in a bid to save material.
Later, as the level of supply got even more acute, the yearly allowance was slashed to just 48 coupons. “Make Do & Mend” became the order of the day with the Ministry of Information issuing a useful pamphlet on how clothing might be darned, repaired and recycled, allowing one to be frugal yet stylish during times of austerity. The stylish bit probably required a broad imagination, but the population was ever resourceful, and nothing went to waste.

Undoubtedly the toughest wartime privation was that of food rationing which was first introduced on 8th January 1940 with restrictions on bacon, butter and sugar. Over the next few years, the net was widened to encompass almost all food items apart from bread, fruit, vegetables and fish although these were invariably in short supply.
To obtain rationed items each person was issued with a coupon book and was then required to register with a chosen shop. Shopkeepers were only supplied with enough goods to meet the needs of their registered customers who in turn had to present their ration books so that the coupon pertaining to the item purchased could be cancelled. The typical weekly ration for an adult was less than generous but its aim was to ensure the fair distribution of available goods throughout the population whilst allowing everyone enough to remain healthy. Those that were able to grow their own vegetables could enjoy a little extra and indeed the entire populace was encouraged to “Dig for Victory”. Very soon allotments, parks and even the grounds of some schools were being used to cultivate valuable extra crops.

Onions were not rationed but were not always available. The thrill of excitement when Mrs Palmer is known to have onions is perhaps typical of that experienced in many little wartime villages when a potential treat was on offer. Ruby’s frustration with Katherine and her determination to go back and queue for them the next day was a scene no doubt played out throughout the country in those dark days. 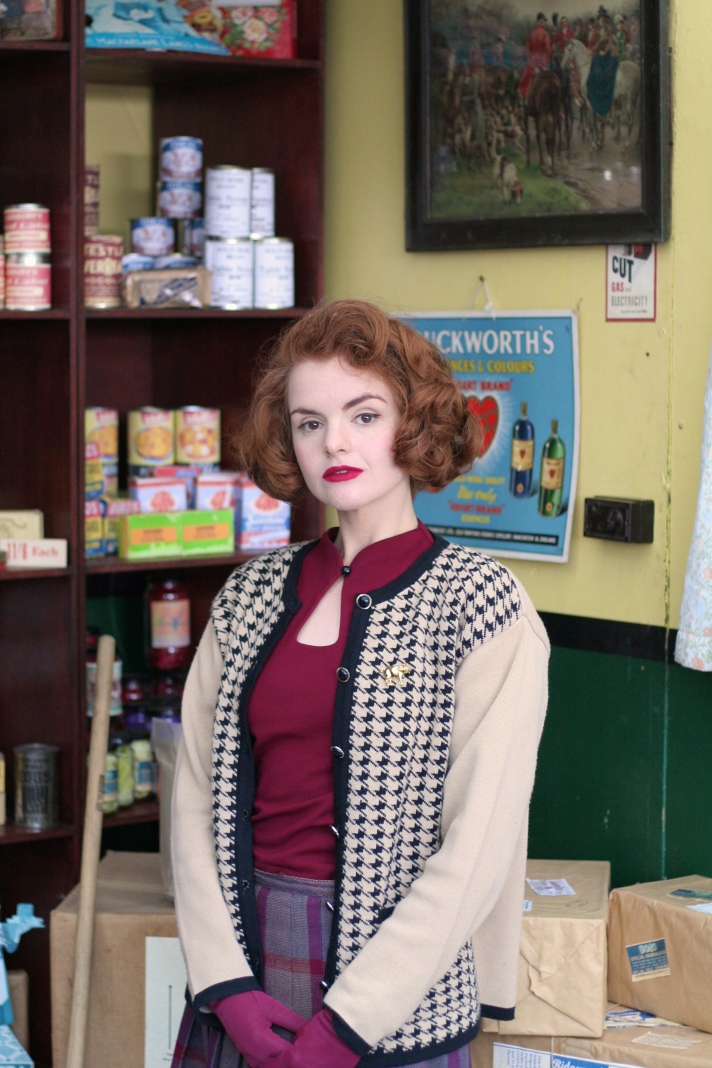 The favoured white loaf had given way to the “National Loaf”, a wholemeal variety that was both grey and insipid and gave rise to countless complaints of bad digestion. In wartime a piece of fruit usually meant an apple as items such as oranges, lemons and bananas had all but disappeared. It is no coincidence that the popular 1930s music hall song “Yes, We Have No Bananas” once more became popular.

The end of the War did not bring an end to the hardship, and food rationing was not finally lifted until 4th July 1954. The Government had presented the population with a diet that was limited and austere, but it did at least enable them to remain healthy and carry on. Indeed, the nation’s general level of health undoubtedly improved. There were some side effects, however, the greater level of starch in the diet leading to a remarkable in increase in flatulence!