I woke up this morning at about half past nine and lay quite still for a moment, just letting it sink in – the day had finally arrived. D-Day. It was later than I’d hoped, but I’d been up until 2am the night before collecting gas mask boxes for flyering on the mile and receiving a ‘Red Cross’ food hamper from my lovely Mum (complete with World War II sticker on the front!)

I breakfasted – cornflakes, because my heady days of stardom haven’t quite started yet although I’m sure I’ll be dipping little delicate pastries into hot chocolate and sipping Champagne for brekky tomorrow – and read a couple of pages of my book to try and calm the slight tingle of nerves in my tummy, but soon flung it aside and went downstairs to finish off the last of the packing. It’s amazing how many pairs of shoes you can fit into one suitcase if you really put your mind to it. Think positive. Sit on the lid.
A producer/writer/actor/stage manager’s life is never dull (who am I? 24601) and so I naturally had a quick backdrop to knock up. No biggie. Google: Battle of Agincourt, Laurence Olivier Henry V, battle scene, flags, tents. Job done, well, half done; I’ll have to finish it at the appartment once we’ve arrived, and I got a blob of red paint on the carpet but at least we now have something vaguely resembling a piece of scenary.

The rendezous was midday. We actually set off at approximately three. That’s an impressive late start even for me, but hey – we’re on no schedule (phrase of the day).
Our designated driver was Tim (former RAF pilot Edward Holmes in the play) as he’d been bequeathed with the covetous title of most responsible adult. The car itself was a beautiful display of Tetris, shoes wedged up cracks and bags of booze and food balanced on laps (because who knows if they even have shops in Edinburgh?). And the playlist; well, let me just toot my own horn for a second, but the playlist was banging. We hit the road to the dulcent tones of the Proclaimers and from there it just built: Britney, Gaga, Rupaul, Hamilton, Chicago, Disney, The Beatles, Fleetwood Mac, Queen. You can’t buy taste, it’s just a natural blessing some of us are burdened with.

Our first stop was Westmoreland Farm Shop, officially the nicest service station in the world (official by me, 2018). I had a pot of tea and an iced Empire biscuit with a little cherry on the top – civillised. Fiona (Nancy Wilde in our little play) tried to buy a ukulele, which I encouraged greatly because unadalterated spending and a slide into frivolity is always an enjoyable sight to behold.
The car alarm was set off by the kids, because you can’t turn your back on those little scamps for two minutes, and Dad (Tim) had to come and fix it.
We ended up stopping for three more wee breaks (this is the glam blog of a sophisticated company, don’t you know?) including having to traipse into a little bistro with Catherine (playing my sister, Ruby Winters) in the Arse-End-Of-Nowhere (actual name) where the bell over the door rang, instantly alerting all occupants to our sneaky toilet break antics, made worse when we got lost coming out and ended up in the kitchen. But the less said of that the better.

Finally, after many weeks on the road – or five and half hours, same thing – we pulled into Edinburgh with 500 Miles blaring out. Start as you mean to go on.
The apartment is SO nice. It’s bigger than we were expecting (when does that ever happen?) and it has such a cute homely atmosphere with fairy lights and big sash windows. The stairs coming up from the front door are lethal though so that’s going to be fun to navigate after a few cheeky Beverleys. Will any of the company make it to the end of the run? Watch this space.

Jac, our director, had a lovely casserole already warming on the stove and it was served up pretty much as soon as we sat down. Slippery slope – we’ll expect this level of service every night. As we took our seats, a bottle of bubbly was popped open to toast our first night, the show, and the fact that we’d actually made it to Edinburgh in one piece. Well, almost. Jacob (Will Croft) shall be swimming over from Spain on the morrow, so let’s not count our chickens just yet. Supper supped it was time for the pub to be pubbed. This is the hour also known as Gin o’Clock. The words ‘line run’ were written onto our rehearsal schedule but we ignored this with reckless abandon. Tomorrow would be for such mortal practicalities. This was our First Night. I fear we haven’t found our regular haunt. Our first pub was deathly quiet, with just the sound of the air vents pumping around the echoing room. The second felt altogether too murderous for my liking. But we sipped away with determination and didn’t return to the apartment until gone midnight, wild things that we are. 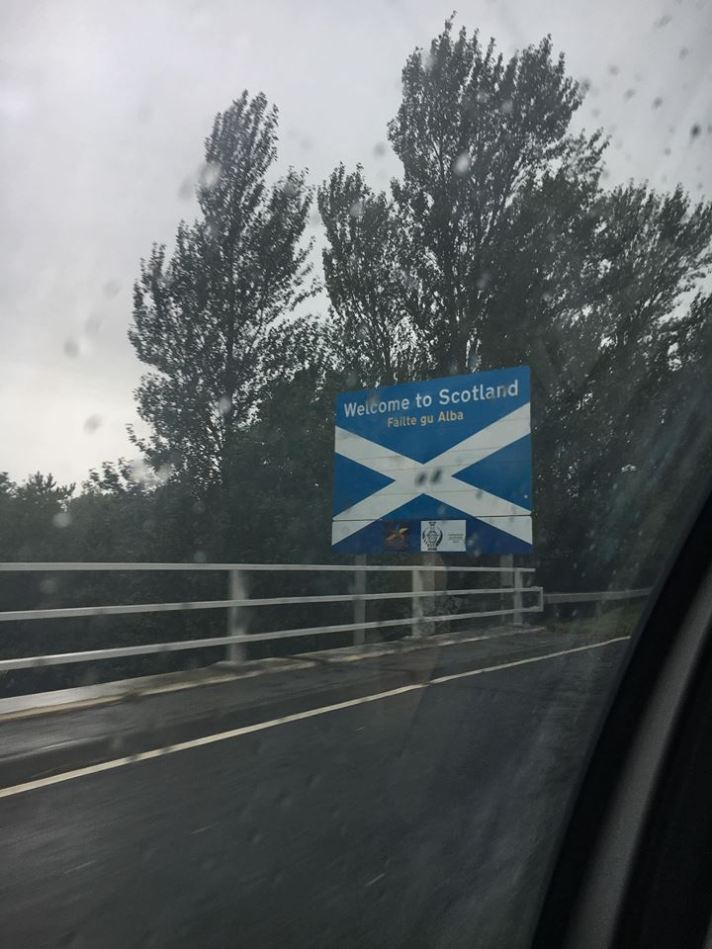 All that remained was to make tea, eat biscuits, and order a big shop to be delivered by Tesco on Friday. Because actors don’t survive on air, darling. They survive on Cheerios, pasta, and the cheapest fruit and veg available to mankind.
With the sound of seagulls accompanying me, I head up the stairs to Bedfordshire with my hair pincurled in a headscarf, ready for our first leafletting assult on the Mile tomorrow. See you in the morning.

Over and out,
Laura
(Katherine Winters)
(Time & Again founder/writer/tea-drinker)