Gosh, it was a real struggle to remember the date. Being at the Fringe is like living in a lovely bubble where days of the week don’t exist and time seems to be fluid as we try to cram as much as we can into each day.

The day started with our dear Laura thundering down the stairs in a flurry of excitement. We had received another 4* review, this time from Edinburgh Guide who described Greyhounds as ‘pretty much perfect’ with a cast who ‘nail it, and are as genuine as the people they play’. To get such a great reception from the critics is wonderful, especially after all the late nights we’ve spent in rehearsals going slightly mad! Our latest success was celebrated with breakfast-time bacon sandwiches for the meat eaters and lashings of tea and toast for everybody else.

We didn’t have long to bask in the glow though, as Jacob, Laura, Tim and myself were off to the Gilded Balloon to catch musical ‘Fall of Eagles’ by Green Ginger Productions. We’ve written a review of the show which you can read here, but to summarise – we thought it was jolly good fun! We caught the cast for a quick chat afterwards which was lovely, so great to talk to a fellow northern company. It was then time for some delicious lunch at veggie restaurant/bar Paradise Palms. This place has incredible eclectic decor, adorned with bright bunting, model pigs, a type-writer and vintage paraphernalia. We wolfed down our food with glee and chatted about the show we’d just taken in.

Meanwhile, Jac, Paul and Fiona took care of business on the home front. They gave the flat a much-needed spring clean and baked up some fresh bread. Paul, our techie, is not only a whizz with the sound and lights but also knows how to make a mean loaf! Whilst the bread was baking, admin was taken care of with Fiona taking to the blogosphere and updating you all on our comings and goings.

It was then time for Jacob, Laura, Tim and I to finally go see one of the shows right up there on our to watch list, ‘I, Sniper’ by Acting Coach Scotland. The play tells the true story of Lyudmila Pavlichenko – often called the deadliest female sniper in history. I came out itching to read more about her! We bussed it back to the apartment as director Jac was cooking up fajitas for dinner. We stuffed ourselves silly with the mexican deliciousness before rushing back out again to perform Greyhounds. We warmed up in our usual car park space and took to the stage. The audience seemed to enjoy the show again, which was great to see!

Back to the apartment again, this time for gin cocktails and board games. Fiona had bundled Articulate into the car at the very last minute on day one, and what a cracking call that turned out to be. The best moment had to Paul be trying to convey the word ‘horrifying’ to Jac, his description being ‘it’s like… a scary film but longer’. Laura, Tim and I were the eventual triumphant winners and reigning champions until the next board game night. 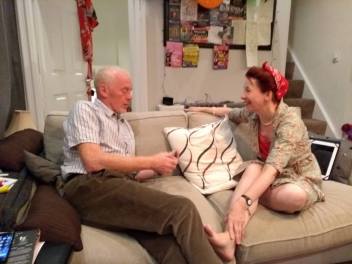 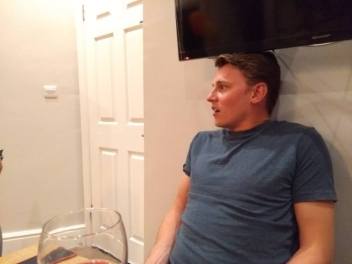